I’m working with an expensive device which has a sensitive sensor. The sensor breaks now and then, and the manufacturer of the device is not willing to help or doesn’t know how to remove the problem source. Thus, I took an oscilloscope and studied the power supply and signal lines of the sensor. I found moderate transient voltage spikes over the 5V supply wires while resetting the whole device. So, after ordering the new sensor, I designed an effective transient voltage protection circuit to clean the power supply. I did not see transients on the signal lines, and it would be hard to add more protection as the data line driver circuity already withstands 10kV electrostatic discharge spikes for example. Anyhow, I named my supply filter as Gandalf 1.2 “You shall not pass!” Transient Voltage Suppression Circuit ðŸ˜€ Here I will shortly present the circuit and explain how it works. If you decide to apply the information found on this site, remember that I don’t guarantee the proper functioning of my design and I don’t take any responsibility of your acts, as statedÂ here!

Here is the schematic of the Gandalf 1.2, the “You shall not pass!” Transient Voltage Suppression circuit. First, if something terrible happens, the 800mA fuse should burn and cut the current. For the proper functioning of the sensor, I needed to test several fuses from different manufactures to find a proper one with enough low resistivity. If there is too much resistance over the fuse, it would drop the supply voltage lower than theÂ sensor manufacturer recommends. I found that 800mA rated quick fuses from Littelfuse have <0.1ohm resistivity. They are likely not the quickest fuses due to smaller ohmic heating, but the proper functioning of the sensor is more important at this point. I tested the circuit with its load, and the supply voltage in the base of the sensor never dropped below the recommendations of the manufacturer. After the fuse, there is the red LED indicating that the 5V is available and everything should be fine. Second, there is the 9.4V rated transient voltage suppression diode which can withstand even as strong as 600W power spikes through itself. It is followed by the two parallel 0.47ÂµF polypropylene film suppression capacitors which share the burden and pass the high frequency transients through themselves. Their nominal maximum voltage impulse is 2500V, and as film capacitors they do not care about the polarity and they should be much more stable and durableÂ than electrolytic capacitors for example. If the other one will break, the other one should still do the job, and if any of the caps will short circuit, the fuse should burn. So, the diode and the film capacitors provide small impedance route for voltage transients to return, as there is this small 0.68ohm power resistor coupled in series with the load. Together with the second pair of film capacitors I calculated that this RC low pass filter provides a cut-off frequency approximately of 0.25MHz, which is even lower if the first pair of capacitors is taken into account. The voltage ringing you will see in the coming photo had frequency of 9MHz which is a lot of higher than the nominal cut-off frequency of the RC filter. To remove the longer lasting voltage imperfections, there is also the 5W and 5.1V rated zener diode in parallel with the last pair of capacitors. And because there is always parasitic resistance in the wires, the added capacitance in the base of the sensor helps to keep up the supply voltage during the load spikes produced by the sensor itself. In this schematic it seems that the data lines are not protected at all, but in the circuit layout they are drawn as far as possible away from the power supply circuity and the cable ground shield is guided between the two parts for capacitively conducting the voltage transients away. 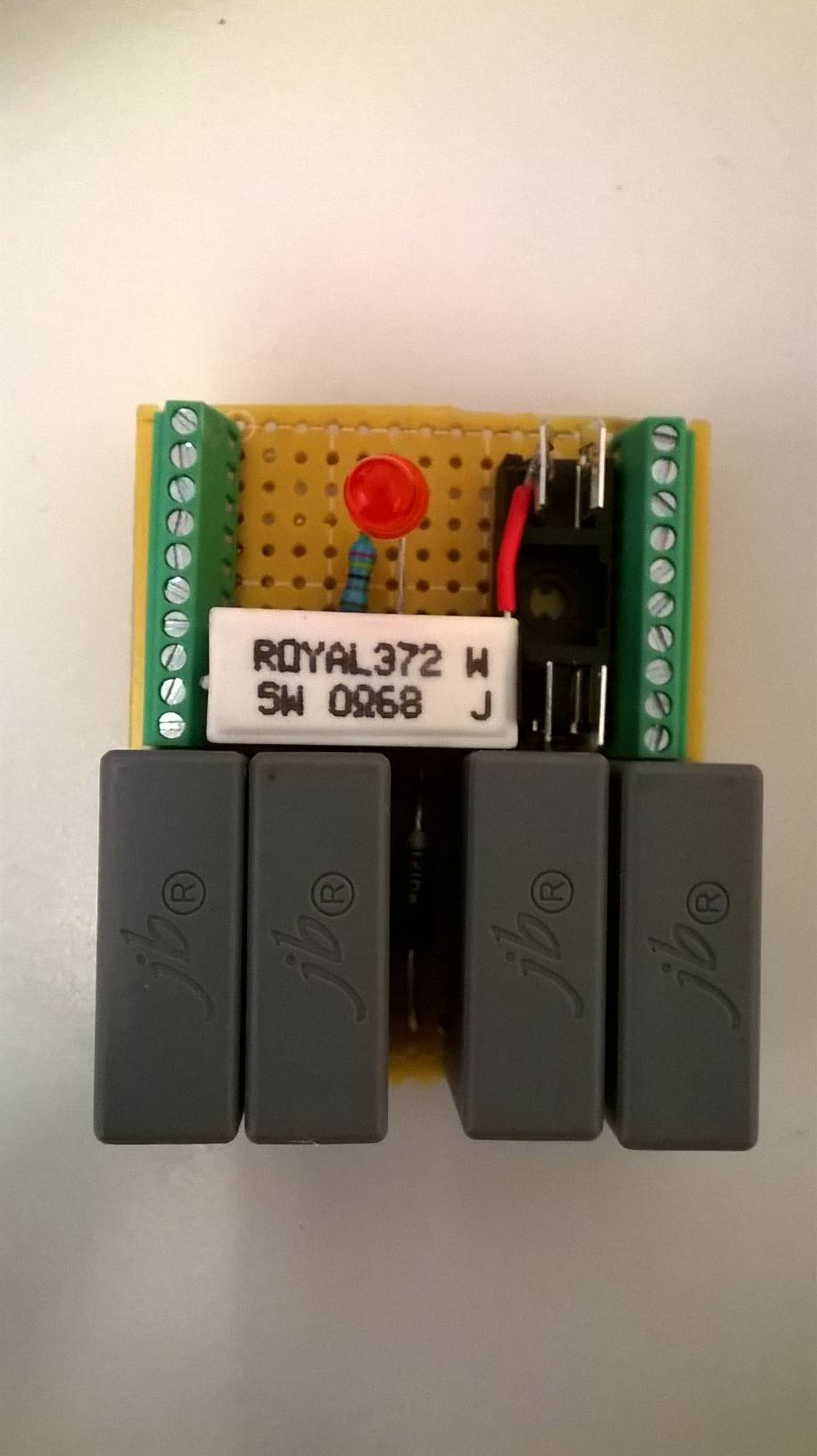 Here is the above view of the Gandalf 1.2. Notice that the wiring of the PWR LED and its resistor are placed above the circuit and perpendicular to the data lines going beneath the circuit board. The distance and the smaller common surface area helps to capacitively isolate the supply coupled LED from the data lines. The circuit board was really tight as it was installed in small space. 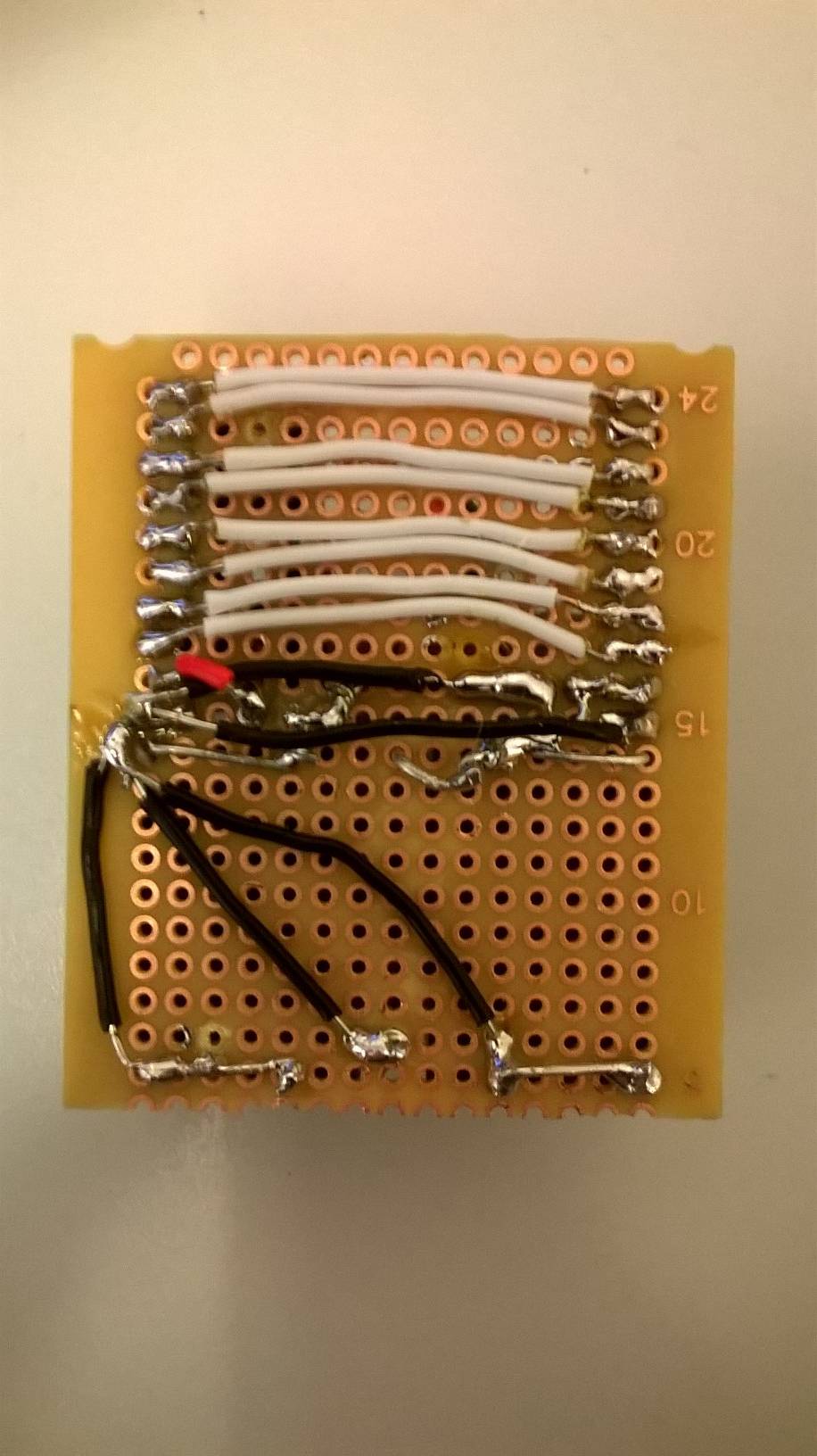 Here is the beneath view. The data lines are pulled through the upper part of the circuit and the supply filter circuity is kept in the opposite side. It is good to connect the cable shield ground in the lowest white wire so that it can capacitively help to isolate the data lines from the other circuit. Notice the common star point of the black ground wires in the lower part of the circuit board. This arrangement helps to get rid off parasitic inductance which makes the circuit susceptible to magnetic interference; there is no major coil in the circuit. Second, transient currents do not raise the voltage level in the above steps of the filtering circuity, as each part has their own route to the main ground point. In the end, the whole circuit was coated by multiple layers of plastic varnish, and the bottom was further sealed with thick electrical tape. 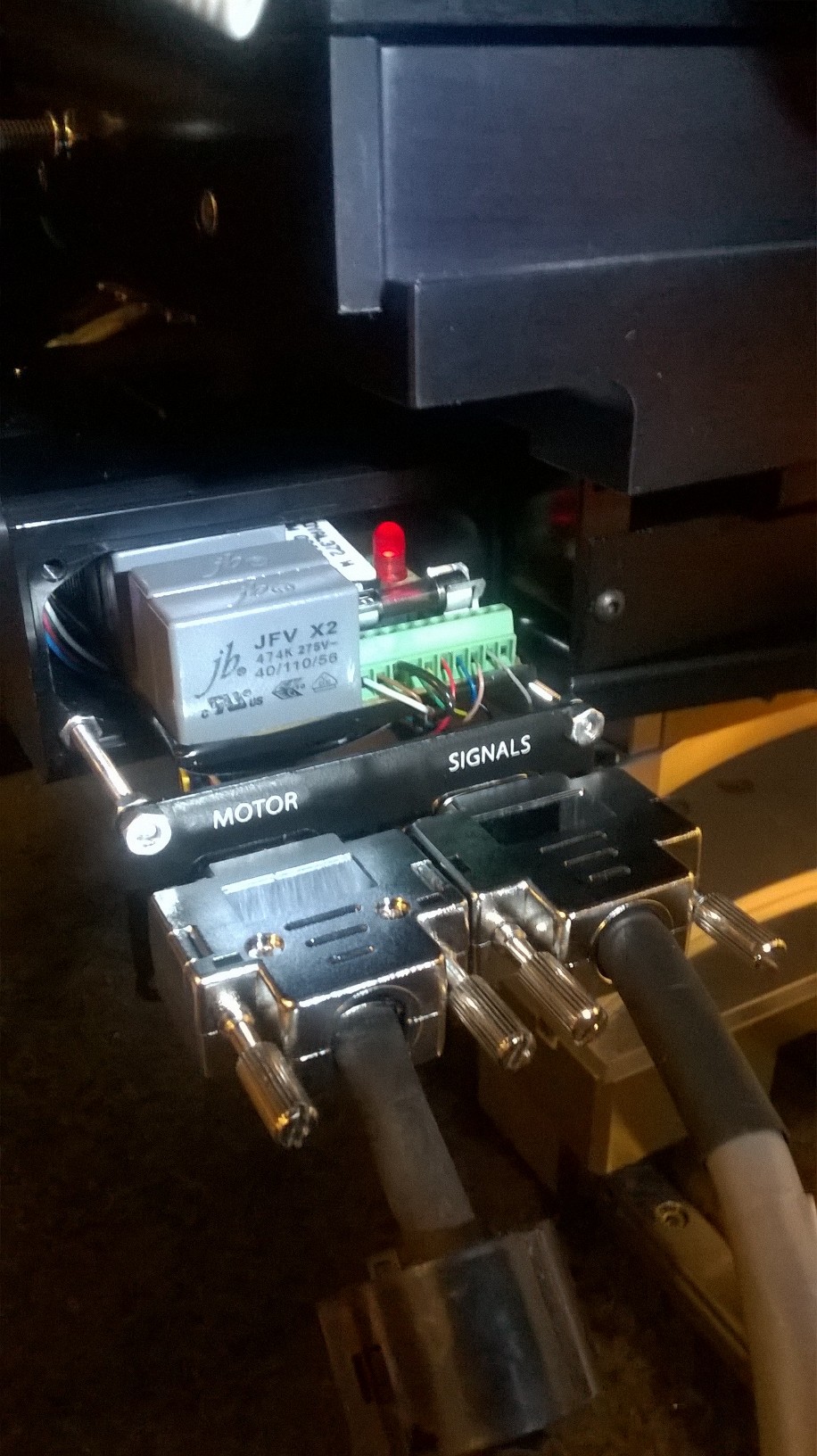 Here is the tight space where the Gandalf 1.2 was installed in the main device. By the aid of the threaded rods I brang the front panel apart from the main chassis and lowered it a little. Now the PWR LED can be observed and the fuse is easy to change.

So, here is the before and after photos from the supply line without a load. On the left-hand side you can see how the 5V supply is cut while the main device is turned on. The approximately 9MHz ringing can also be seen, which can raise the voltage as high as 11 volts. On the right-hand side is the supply voltage seen in front and after the Gandalf 1.2 without a load. Now the voltage nicely raises to its correct level and stays in the proper voltage range recommended by the manufacturer. The suppression circuit works nicely also with the sensor.