Dreams are maybe the most interesting source of inspiration for drawing. I have already drawn many images after seeing some spectacular and effective dreams. By drawing I can somehow save these illusions seen during the longest trips inside to myself. It is funny how the real life experiences are mixed together in dreams and sometimes they produce something meaningful, but most of the time just nonsense. A couple of months ago I again saw something really interesting. I will talk about it after a little introduction to tree climbing.

About a half year ago I bought tree climbing gears for myself. It is not a common hobby in Finland, but I was inspired by an abundant web material about people elsewhere who climb up on trees with ropes. For example, here is a link to the YouTube account of Climbing Arborist. There climbing professionals keep tutorials about basic tree climbing techniques, how to make climbing knots etc. Climbing Arborist. As a hunter I was interested to use tree climbing for getting better sight and for avoiding spreading scents during raccoon dog hunting. The raccoon dog is an alien species in Finnish nature and it is harmful to bird populations, it spreads different diseases and so on. I thought that it would be super exciting to climb on a tree in a dark forest with a shotgun and start luring small predators by mimicking rodents. And yes, it is exciting! 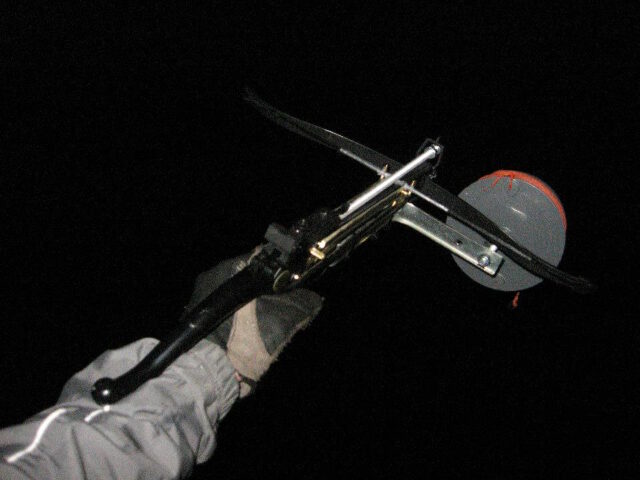 A small toy crossbow, which I use for shooting the prime rope over a branch. 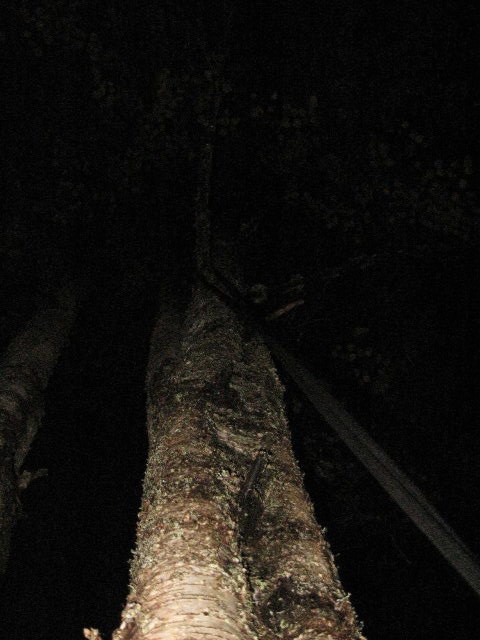 With the small prime rope it is possible to pull the main rope over the branch.

So far I haven’t catch anything during my few trips, because the climbing technique needed quite much practicing. I have special boots for tree climbing trips and I don’t use them for anything else. When I go to a forest, first I put on my climbing boots which are kept in a clean plastic bag. Then I wipe them with a moss and if possible, I also wash them in a puddle, lake or in a stream for example. With these procedures I try to avoid leaving scent trails behind me. Then I go deeper into the forest to look for strong trees with thick branches. When I find one, I shoot a thin prime rope over the branch with a small crossbow. Then I pull the main rope over the branch with the prime rope. After that, I tie couple Klemheist knots around the main rope and then attach them to my climbing harness. Then I climb high as possible with the foot locking technique. After a couple of meters, I tie a new rope around the trunk so I’m still somehow secured if the branch breaks up. I have build a metallic stand which is assembled in an appropriate height under my feet. I can stand over my stand ( ðŸ˜€ ) while getting support also from the main rope still attached to my harness. Then I take my shotgun from a bag, equipped with home made LED sights over the barrels. This whole process needs a high focusing and patience, since I have all the needed gear all the time in my bag and I cannot put them down even on a ground (I try to minimize leaving scents as much as possible). Usually, I climb on a tree before the dusk comes. Seeing the chance of light to darkness is quite impressive sight from a tree. 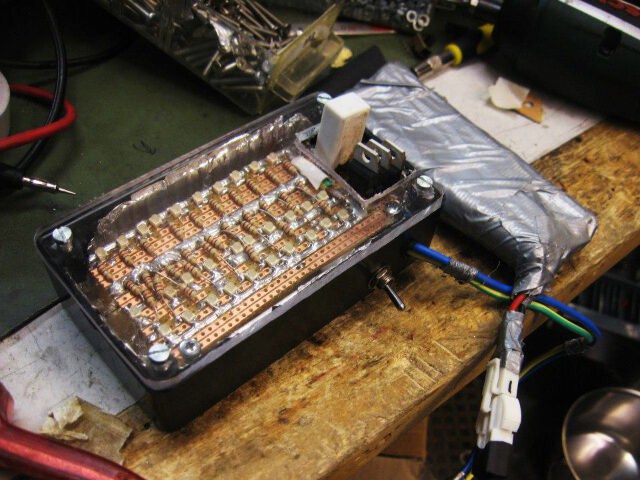 A home made infrared cannon for imaging during night hunting. I attach this to my climbing helmet with a digital camera. I have removed the infrared filter from one of my cameras, so that it can see infrared. This setup cannot be used for aiming purposes since it is banned in Finland. 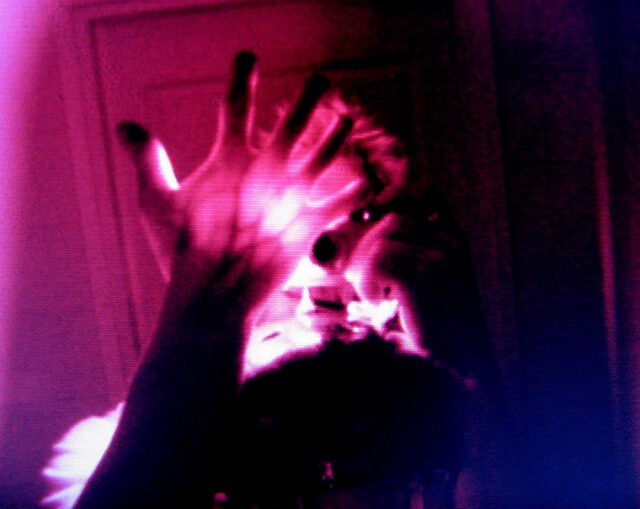 Here is the camera and another infrared cannon attached to the climbing helmet. Here I transilluminate my hand with the infrared light. 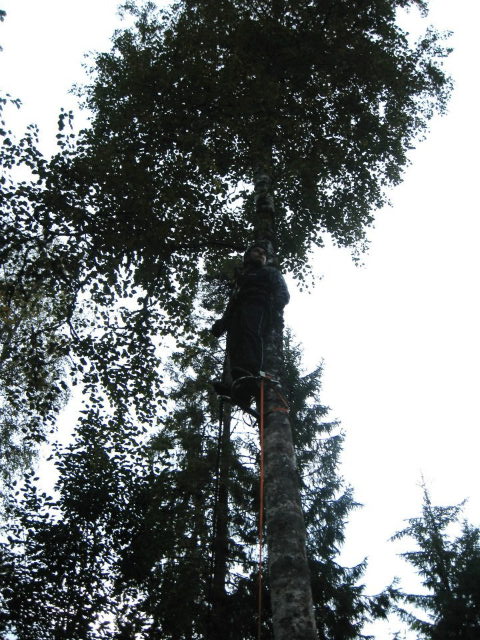 This image was taken by my friend when we tested the home made tree stand. 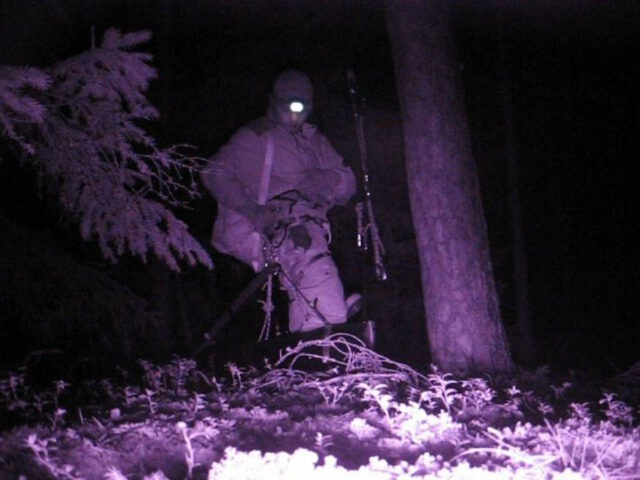 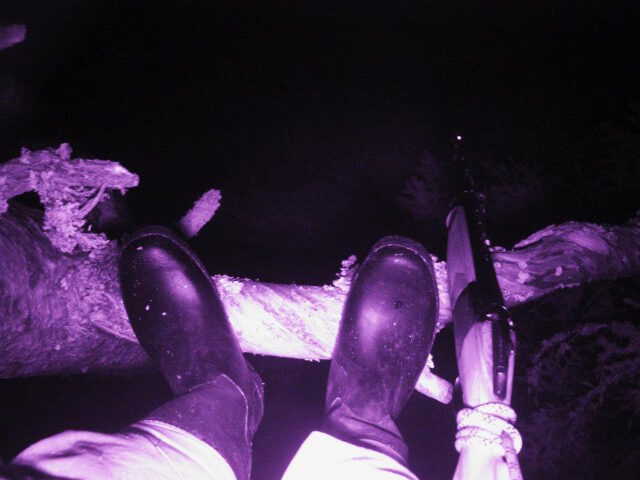 Standing on a branch. Here you can see the LED lights which are attached over the shotgun barrel.

So, about the dream. I’m constantly trying to read as much as possible about everything from biochemistry, electronics and quantum physics for example. I want to know much as possible, it is kind of a drug for me to understand things. And as a future scientist I will start to research things also seriously. From these scientific and tree climbing elements I saw the mysterious dream I was going to talk about. These different aspects got tangled together in a fancy way and after I woke up I was really confused about what my subconscious presented to me. In the dream I was in a pitch dark forest with my climbing gears. I was alone in the darkness and the forest were calm. I saw a huge and super tall pine and I wondered, what could I see if I climb on it? I shot my prime rope over the highest branch and soon I was climbing along the trunk. I got higher and higher, and I was scared, because I fear that I could fall from the highness. I still firmly carried on and climbed higher, because I really wanted to see the surrounding world from above. 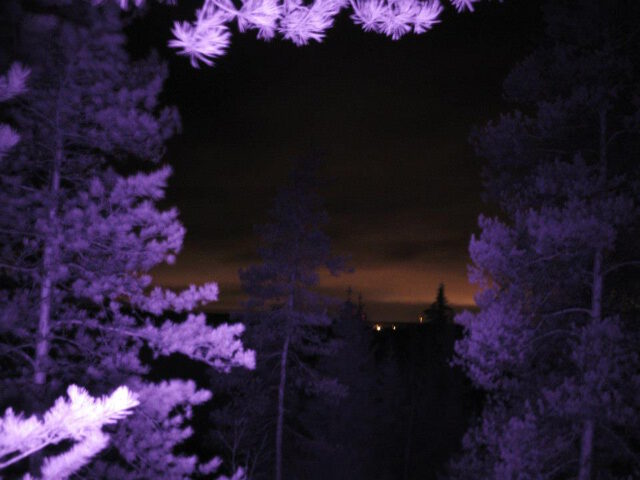 Sometimes views are amazing from a tree! Notice how far trees are illuminated with the infrared cannon.

Somewhere in the middle of the pine I stopped and watched around. I was shocked, because I saw things that weren’t visible from the ground. I saw that the forest wasn’t empty at all, but it was full of the creatures of night, which were hiding behind bushes around me. I didn’t fear only the fall anymore, because I realized that from above I could see things that I couldn’t unsee later. By going higher and higher I would see more and more things that I wasn’t able even to imagine, and I was there all alone. I decided that I will climb even higher, I can stand and handle whatever I will see. I climbed so high that the world was shrinking under me and I saw far beyond the earlier horizons. Stars came closer and I saw my home over the forest while the creatures were still wandering far below me. I was really scared since the fall was high and the familiar world were strangely bending below me. I didn’t want to return since it was too late to see the world as a familiar and boring place and it came odder and more exciting during the climbing. Then, I woke up. Gladly I didn’t fall, but the travel to the highness wasn’t completed in my dream. It was a really effective and somehow really descriptive dream about the present. That’s why I drew this image from the dream. 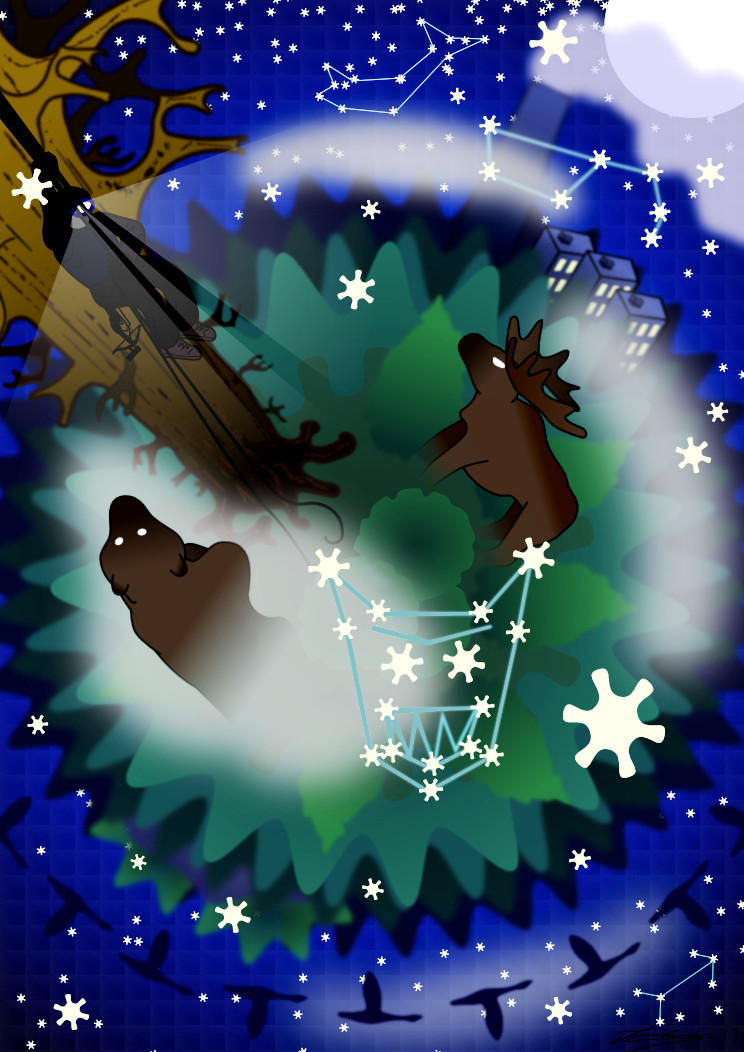